What Does Doug Ford Really Want? 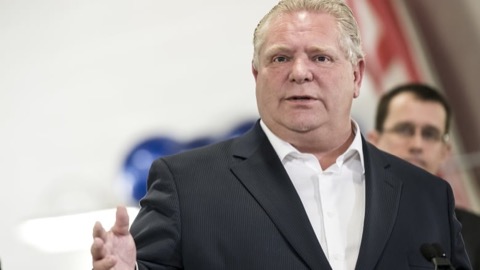 "While they say they're trying to "modernize" our education system, leaked documents reveal that their cuts and plans for mandatory e-Learning were designed to achieve “maximum revenue generation”, not a better educational experience. "

As job actions begin to escalate in communities across our province, Ontarians need to ask themselves: what does Doug Ford really want?

He says his goal is to keep students in the classroom but has refused offers made by Ontario’s educators to resume constructive negotiations. He has ignored parents when they overwhelmingly told him that they were opposed to class size increases. And while they say they're trying to "modernize" our education system, leaked documents reveal that their cuts and plans for mandatory e-Learning were designed to achieve “maximum revenue generation”, not a better educational experience.

So if Doug Ford doesn’t want to get back to the bargaining table, listen to parents, or do what is best for our students, what does he want? This doesn’t seem like a government trying to build a better education system; it looks like one trying to balance the books by short-changing our students and putting their future at risk to settle a political score.

It’s no secret that Ontario’s educators and our province’s Conservative governments haven’t always seen eye-to-eye, but it’s shameful for Ford to be putting our students’ future at risk to play out a political game. No jurisdiction in the world has increased their competitiveness and economic prosperity by cutting funding to education.  When asked to identify where their model has been successful, Ford and Education Minister Stephen Lecce point to Alabama, which currently ranks among the ten lowest of the 50 states in terms of education quality.

Is that what we want for Ontario? It’s time to tell Ford to stop playing political games with our students’ future. It’s time for his government to do what is best for students and reverse their devastating cuts to our world-recognized education system.

Read full article at
Written by Here For Students
January 23, 2020
Read full article at
Contributed by the Here For Students Staff
Share on FacebookTweet
90,000+ Ontarians Have Signed Up
If You Think Our Students Deserve A Strong Education System, Become A Supporter Today!
Join thousands of Ontarians and show your support for Ontario's students, support staff and teachers today!
Thank you! Your submission has been received!
Oops! Something went wrong while submitting the form.
We're
About Our Campaign
Take Action Now
Follow Our Campaign